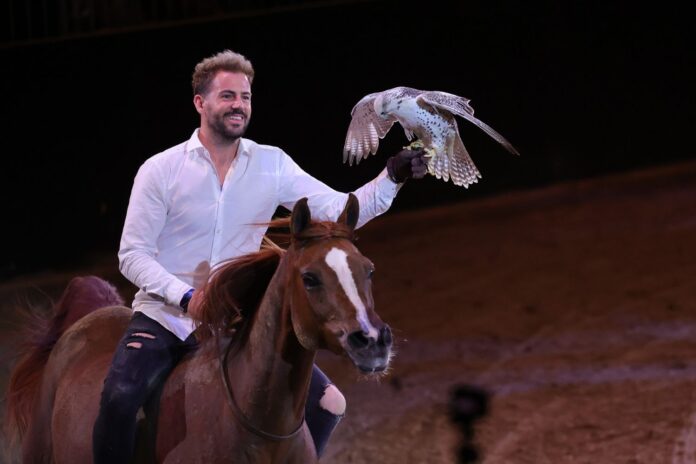 The Hop Top Show: A Look Behind the Scenes

The Hop Top Show is the evening highlight of every Equitana, offering visitors an unforgettable experience. Many of the internationally renowned artists also associate very personal memories with their performances in the big arena. For many, it was the starting point of an impressive career.

From Essen to the Olympics

The Spaniard Santi Serra Camps performed in front of the Queen at the Olympic Games in London and has asked his Friesians and Arabs to dance in Los Angeles, Hong Kong, and Qatar. Before conquering the world’s prestigious arenas, he first wowed audiences with his playful and humorous composition of dogs and horses at the Hop Top Show in 2015. Two years earlier, he had won the Show Cup at the Equitana and thus recommended himself for the big stage. “The Hop Top Show is the greatest spectacle of all for me. To be there with my horses is just great. It is an experience every time,” says the 34-year-old. He has been a regular guest since his first performances and was last part of the anniversary show “Rhapsody” in 2022.

Adventure with Permission to Leave

Audience favorite Lorenzo still needed an exit permit from his mother for his first performance in 1995. “At that time I was just 17 years old and there was still a border between France and Germany,” he recalls. The adventure was a turning point for the young man and his four Camargue horses. “It was the beginning of my international career as an artist.” It took him to Las Vegas, the United Arab Emirates, Jordan, Malaysia, St. Petersburg, and time and again to Essen. He describes the Hop Top Show as a special challenge: “For me, it is also always the search for the next spectacular creation.” In the minutes before entering, he focuses completely. “In these moments the tension is very high. Then I don’t talk to anyone. Instead, I make sure that my horses are placed correctly and that everything in my team runs as we discussed beforehand.”

Harmony and the unique connection to her animals – Anne Krüger-Degener has always fascinated the audience with this. But she herself also feels the trust that dogs, goats, and especially the horses show her is a gift. “One of the most beautiful moments for me is when we put our horses down in the Hop Top Show and, despite the hustle and bustle and the music, they really let go and even close their eyes. That can’t be forced.” But the animal trainer was touched by another experience: “At that time Carla was still very small. We came out of the show and backstage someone brought us a pizza because the child must be hungry.”

A good after-show party is also important to him, admits Viktor Brüsewitz with a broad grin. The internationally successful vaulter has already galloped through the big ring several times with his team, acrobatics, and spectacular light effects included. Jannik Heiland is responsible for that. “That’s just his thing – especially when it lights up at the end.” The boys do everything themselves, from the costumes to the choreography, and are correspondingly nervous about whether everything will work out. “Beforehand, there are tingles everywhere. We are totally psyched and want it to start at all costs,” says Viktor Brüsewitz.

Laury Tisseur was also tense before his first performance. The show “Rhapsody” (2022) was the premiere for him. “As a child, I used to watch the artists myself and never thought I would be on a stage like this myself. To be part of the Hop Top Show is a dream come true for me.”

The Hop Top Show has been staging the magical moments in the special relationship between man and horse with poetry and lightness for decades. It is not only an experience for the audience, but also for the artists who have the opportunity to showcase their talents and make memories that will last a lifetime.

The 2023 show promises to be just as spectacular as the previous years, and tickets will be available soon. Which artists will enchant the 2023 audience is still a secret, but one thing is for sure, it will be a night to remember.

The World Equestrian Show will return to Essen, Germany next year, showcasing some of the industry's most renowned brands...

Mark your calendars for March 9th-15th, as the world's premier equestrian event, Equitana, returns to Essen, Germany. This year's...

The horse’s diaphragm: All horses must be able to feel out...

Can your horse find it hard to catch its breath? It actually has to be able to get that...

JUST LIKE THE OTTO-PERFORATEDMAT – BUT WITHOUT THE ‘PERFORATED’ PART

The OTTO-IndoorMat is designed specifically for indoor surfaces and offers all the same features as the OTTO-PerforatedMat, such as...

Para-rider Cecilia Rosell“If I Don´t Ride My Horse, I End Up...

What does it mean to be a para-rider? What kind of life can you have with horses, when it...

This weekend the Sweden International Horse Show was hosted outside of Stockholm. Equestrians from all over Europe traveled to...

Minimize the load on the horse’s legs with floor mats

5 ways to avoid deep mud in the paddock

Minimize the load on the horse’s legs with floor mats

5 ways to avoid deep mud in the paddock