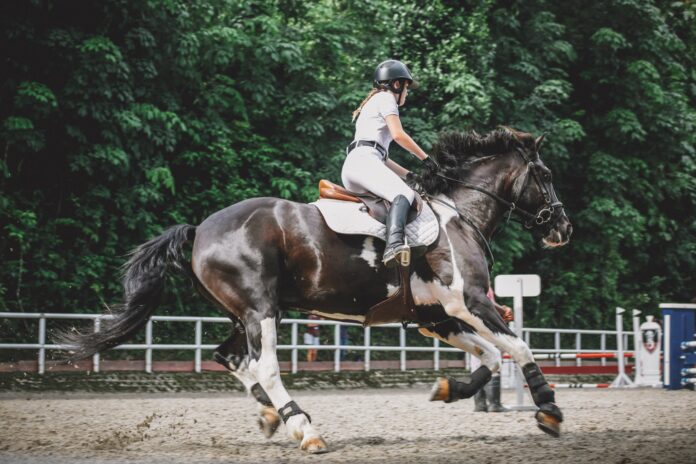 The Formula of Success: Why Jessica von Bredow-Werndl keeps on winning

Jessica von Bredow-Werndl and TSF Dalera BB definitely don’t rest on their laurels. With two Olympic and three European gold medals tucked under her belt for the past eight months, Germany’s pride are fashioning themselves as the top favorites to win the FEI Dressage World Cup when the 2021-2022 tournament opens in Leipzig, Germany in two weeks’ time.

Just recently, Jessica talked about the path that has taken her to where she is now and her career plans. She disclosed all of these while driving her lorry full of horses from CDI in Ornago, Italy yesterday where she steered the constantly-improving 13-year-old gelding Ferdinand BB to win the prestigious Grand Prix and Freestyle. On the other hand, her student rider Rapahel Netz won three U25 competitions as well.

Bredow-Werndl shares that while she appears to be the most favorite, she doesn’t take anything for granted.

“Of course you have to have a clear vision and you must set your goals,” Bredown-Werndl says. “But over the last 20 years there were times when I didn’t believe in myself anymore. However I always tried to push myself and I held on to my dreams and hoped the opportunities would come”, disclosed the 36-year-old based at Aubenhausen in southern Germany who is currently in the No. 1 spot in the Dressage World Rankings.

Jessica’s road to success wasn’t easy. However, she credits it to her sheer discipline and innate uniqueness and determination..

By the age of 19, she already had earned six gold and two silver medals at the European Championships. And it all went downhill from there.

“I had some difficult years with hardly any success and I struggled a lot. I had been Junior and Young Rider champion many times so I dreamed of it at Senior level. But for more than five years it didn’t happen”, she says.

However, Jessica learned to not take so much on her plate. She turned things when around when she finally decided to be herself.

“I stopped trying to imitate other riders and began to focus on doing things my own way – the way I always loved to do it, going back to being the little girl who loved to play with her horses. The horses began to enjoy it more and I don’t ever want to lose that joy again!”, she explains.

She considers herself as very lucky when Beatrice Bürchler-Keller entrusted her with Unee BB in 2012. This was the horse that changed her life forever.

In 2015, the pair would go on to win bronze medal at the FEI European Championships in Aachen, Germany and they also finished third at three FEI Dressage World Cup™ Finals in Las Vegas, USA that same year, in Gothenburg, Sweden in 2016 and they repeated the feat once again in Paris, France in 2018.

“Unee was one of the most important teachers for me”, Jessica shares. “He wasn’t interested in me when he first arrived so I had to find a way to make myself interesting to him. He was nearly ready for Grand Prix when I got him and I really wanted to win his heart but I couldn’t do it the way I used to do it because I always grew up with the horses I’d ridden before. He already knew what he was doing and had his own way, so I had to learn his language before we could both learn a common language. I learned that it’s not just about the horse doing things my way but about doing what is best for each individual horse and being more flexible”.

Jessica is also proud to have worked with many top trainers including Paul Elzenbaumer whom she describes as a very patient, loving and calm man. She also worked with Stefan Münch and compatriot Isabell Werth who will be defending her title at the 2022 Final with Weihegold.

“However I always have my own ideas, and I rely also on my brother Benni (Benjamin Werndl) who is very important to me – it’s our goal to be in the German team together some day!”, Jessica points out.

But now that she is on the top, her career revolves around the brilliant and highly-skilled 15-year old TSF Dalera BB who she has been riding since the mare was eight years old.

“It was when she was 10 and we won the Louisdor Final in Frankfurt that I realised she could be very special, and when she was third in the Freestyle in 2019 (at the FEI European Championships in Rotterdam) that was the day I thought everything is possible. Then two years later (at the Tokyo 2020 Olympic Games and FEI Dressage European Championships in Hagen) we proved it!”

Jessica is also excited at the idea of working with the horse in the future as she sees a big room for improvement for them.

“She feels she can give even more and when I enter the arena I always know she will try her heart out and give her best. I think she loves me and the life she is living. She loves travelling and she’s a real showgirl! But we both enjoy cantering through the forest as much as competing. She’s grateful for that, and so am I”.

Jessica is a woman with an array of talents and skills on her disposal. During the lockdown, she wrote a book entitled “Heaven on Horseback” which is centered on her life, struggles and inspiration that brough her to the top of the game. She is currently working on a second publication and this time it’s a children’s book.

Jessica is a woman of many talents. During lockdown she wrote a book – “Heaven on Horseback” – about her life, her struggles, her inspiration and her positivity, and she’s currently working on a second publication, a children’s book.

A near-death experience changed her view on life and helped her become introspective. She shares that the only way that the person can become successful is to move forward from all the trials and tribulations he or she has to go through.

Her five-year old son Moritz was with her on she travelled to Ornago. It was the first weekend without the support of her husband or parents but it worked out well thanks to the helping hands of grooms and riders. Jessica is expecting another baby which is due on August which negates her chance of participating in any tilt at the World Championship titles. She knows too well more things are set to come on her way in the future.

“I’ll have to manage my life even better and I’ll need more help for sure. It’s really important to have a good work/life balance”, she says.

On the other hand, she’s aiming to return to action as quickly as possible after the birth of baby number two.

“I was competing four weeks after giving birth to my first son, so hopefully I can do that again!”, she says with in jest.

For now, she is focused on the FEI Dressage World Cup™ 2022 final. She says that Dalera will undergo simple preparation.

“Nothing special, just keeping her motivated, healthy and happy, hacking in the forest and if the weather is good then going on the gallops”, she explains.

As for preparing herself, she will recalibrate and realign her focus on her basic purpose.

And the story of Jessica’s success certainly doesn’t end there.

Training: How to find the correct length of your stirrups

Are you in doubt whether your stirrups have the correct length. In this article you will have an easy way to find out if your stirrups fits.

How many times have your tried falling off your horse? An old saying goes, that you are only a...
Advertisement