Martingale and other tacks: Does it make sense to use them?

If you think back on your first riding lessons, the image in your mind may not be so elegant. Riding school horses often get to trot with beginners and deal with riders who have poor balance and unsteady hands and reins. In an effort to avoid these situations becoming too uncomfortable for the horse, some riding instructors resort to the use of a martingale or elasticized rein inserts. But does any of it benefit the horse? 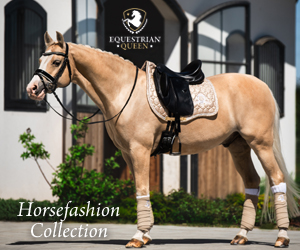 A riding school horse has to put up with a lot. It is rarely intentional when beginners, for example, pull the reins too hard. Most horses will try to signal no using their body language. Often, they will shake their head, lower their ears back and whip their tails to show discomfort. This is where martingale can be useful.

The function of the martingale is to make sure that the horse cannot raise its head up to a height where the rider can lose control of the horse. However, there are also many riding instructors who believe that martingales can help beginners to keep their hands calm. And thereby avoid the conflicting behavior that an unsteady hand can cause. While others would say that the rider loses touch with horse when they are using martingales and other forms of auxiliary reins.

You may also like to read: Remember to respect your trainer

SCIENTIFIC STUDY ON THE MATTER
A group of researchers from Michigan State University and the University of Sydney took a closer look at the dilemma in a study back in 2009.
In the study, which is published in The Veterinary Journal, the researchers tested four beginners and nine horses with different types of auxiliary reins.
They tried to figure out whether these could help minimize restless hands and thereby release the horse’s discomfort. Ordinary reins, adjustable training martingales and elasticized rein inserts were used. Here, rein-tension and the horse’s behavior were measured based on predefined behavior patterns. This took place on both diagonals in the riding arena with four Arab-horses from the same riding school. The horses had basically the same level of education and well fitted equipment. A machine was used to measure the rein-tension with the different types of reins.
Overall, the study showed that there was no big difference in the behavior of the horses with different types of reins, but the rein-tension was higher with the martingale. The advantage of the martingale, however, was that the horses lowered their heads more with the martingale, which was allowing the horse to use its back better. Therefore, the researchers conclude that well-adjusted martingales may have their eligibility at riding schools when beginners need to learn how to ride.

There will always be arguments for and against martingale. And there are many different aspects that need to be addressed in the debate.

The study in practice

All the riders were asked to do a sitting trot, make a transition to walk, change direction and continue the sitting trotting. They were not asked to have a specific rein length or a special contact with the horse’s mouth. The three types of reins were tested in random order and the riders did not know the background of the study. Along the way, they had to ride as straight as possible between two set of cones, where the researchers measured the behavior of the horses.

For the study, a basic form had been prepared to look at the behavior of the horses. Two riding instructors assessed the neck of the horses and the ear position with the different types of reins as well as observing the general conflict behavior such as head throw and tail whip.

No big difference, but…

The study showed that there was not much change in the behavior of the horse or their body language depending on whether it had on auxiliary reins, martingale or elasticized rein inserts. Furthermore, the hand position of the riders was not something that played into the conflict behavior of the horses. Often the beginners had so little rein contact that there were no measurable advantages in the use of elastic reins.

However, there was one point where researchers could spot a difference. When the horses wore martingales, they observed that the horses tended to lower their heads more than with ordinary reins or elasticized rein inserts. This helps to provide a more relaxed horse, making it more comfortable for both riders and horses.

In addition, the study found that although the rein-tension was higher with the martingale, it also helped to give the students a steadier hand. The steady hand allowed the horse to have more contact with the bit and lower its head. Even if the rider got out of balance.

However, it is difficult to assess how much rein-tension it takes before it becomes uncomfortable for the horse. This will require even more in-depth studies with a different type of both horses and riders with different levels of training. Of course, it is always preferable that the horse is ridden correctly so that it learns to use the body correctly. There is no guarantee that beginners will be able to do this the right way.

A kind of conclusion

Bottom line is that the researchers did not find a significant difference in the conflict behavior of the horses depending on the type of rein. Instead, they learned that the martingale can still increase the welfare of riding school horses. Because it can help the horse to lower the neck and provide an opportunity for the rider to keep at steadier hand.

The Veterinary Journal: Effects on behaviour and rein tension on horses ridden with or without martingales and rein inserts

Training: How to find the correct length of your stirrups

Are you in doubt whether your stirrups have the correct length. In this article you will have an easy way to find out if your stirrups fits.

How many times have your tried falling off your horse? An old saying goes, that you are only a...
Advertisement