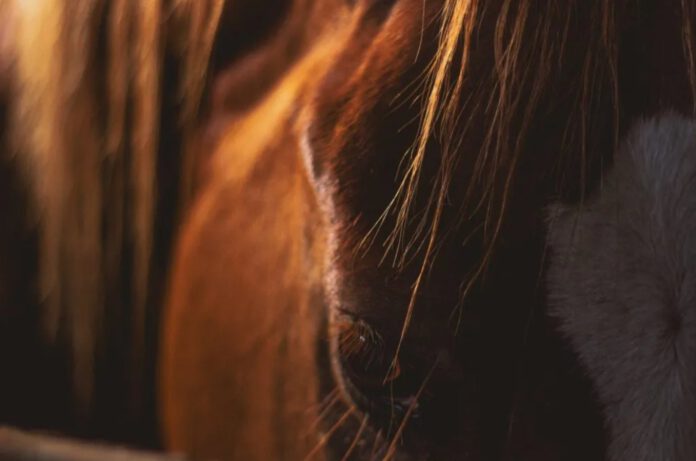 Study: How much your horse blinks reveals its level of stress

You may also like to read: Riding in the twilight: How well can your horse see in the dark?

HOW TO MEASURE THE HORSE´S LEVEL OF STRESS

The most recognized method of measuring a horse’s level of stress has long been the amount of the stress hormone cortisol. But the horse’s facial expressions also reveal a lot about its state of mind. If it is exposed to dangers – you may recognize that it snorts and closes its eyes as much as possible, tightening its jaw and mouth. This is how most horses react to something dangerous.

To assess whether a horse has a high level of stress, the above is used to give points at either 0.1 or 2, of which 2 is the highest.

About the research project
The Canadian researchers measured the blink rate in 23 horses to test the level of stress. They put them through three situations with different level of stress – separation from the herd, deprivation of food, and exposure to a dangerous object. In relation to the separation, they separated the horse from the herd so that it could not see the other horses. When it came to the food situation, the other horses were given food except the ‘test horse’. As far as the exposure with a dangerous object, they threw a large ball in front of the horse. The researchers measured the horse’s blink rate on video and compared it to the blink rate in the box when it was relaxed.

How much you blink is already a well-known way of examining stress in humans. But also in cattle (for example in connection with slaughter). It is not yet a phenomenon that is widespread as an indicator of stress in horses. But researchers believe that it may be in the future when we continue to study the welfare of horses.

Riding in the twilight: How well can your horse see in...

At the moment the days are getting longer. And maybe the sun is still kind of up when you...

Low or high? The location of the hay net affects the...

The hay net has long been a controversial topic in the equine world. It can extend the eating and...

Study: How does your weight affect your horse?

Article after article has been written about how much weight a horse can carry. Some consistently refer to the...

Decoration with a purpose. Many riders now have diamonds on their horse´s headband, lacquer on the gaiters and some...

Study: Why half pads underneath the saddle can be effective

Are you using a half-pad underneath the saddle when riding your horse? Reasearch indicates that this might be a good idea.

Science: How often does your horse need shoeing or trimming

How often should your horse have a visit from the farrier? An english study provide you with an answer in this article.
Advertisement

Riding in the twilight: How well can your horse see in the dark?

Low or high? The location of the hay net affects the horse’s back, neck and jaw

Equestrian Sport: A look at jumping now and then

Body awareness: The best way to proper posture and impact

Guide: How to rid your horse of separation anxiety and fear of being left alone